The fact that I even have to type this out and hang in the kitchen is PATHETIC! but True...Feel free to ADD any of your rules to the bottom, in the comments area! I'd love to hear them.

Posted by Unknown at 7:48 AM No comments: Links to this post

Holy Hannah! I made PIE!

Well, I don't really know who Hannah is... or whether or not she is Holy... but what I DO know, is that "I made PIE!!"  Now, that may not seem so great an accomplishment to you, but I have led a fairly full life of cooking and baking, and known to be fairly good at it... but NEVER have I made (or even attempted to make) a PIE! ...unless you count Pizza Pie! LOL... but seriously... Pie Crust is one of the things I was just SURE I couldn't make. Not because I tried and failed, but because I FAILED to TRY.

So a month or so ago I was sitting in the living room with dear husband and I remarked how I really would like to make a Peach Pie (my favorite) if only I had a pie crust. "Why don't you go make a pie crust for me?" I said to DH. He didn't respond...at least not at first. 10 minutes later he got up, went into the kitchen and asked where the flour was. "Why?" I asked him. He said, "well you asked me to make a pie crust and it requires flour." Wow! Why didn't he respond like that when I asked him to build a deck on the back of the house? Hmmm owell, little steps. 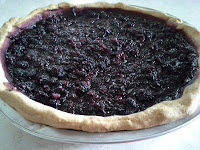 A couple hours later, we had Pie. I cut up the peaches and mixed with sugar and spices and added it to his amazingly normal looking pie crust and we baked it. WOW! It was great. I was totally surprised. For a week or two I was resigned to a life of husband made pie crusts with me assembling the fillings. But then the competition or the inadequacy got the better of me and I asked him if he'd show me how to make pie crust. Not only me, but my pie-queen-friend also wanted to know his secret/method. So she came over one day, and we assembled all our ingredients and followed his example and we three made 3 pie crusts with our own individual fillings. He made peach, my friend made strawberry rhubarb, and I made Apple-Pear-Raspberry. Awesome pies! (mostly)

After that day, I decided I could now whip up a pie crust at a moment's notice! What an awesome ability! Yesterday I made a Black Raspberry-Mullberry pie using berries picked in our backyard and today I have in the oven 6 little mini pies of the Peach variety, complete with lattice tops. (see below) Tomorrow will be another Black Raspberry and a Cherry pie also from our back yard cherry trees. This has opened up a whole new world for me... someday I may even try making a savory pie! 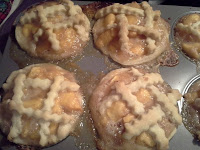 Posted by Unknown at 7:47 AM No comments: Links to this post